The GeoSpray® geopolymer system is made of a high-performance, fiber-reinforced geopolymer mortar, specifically formulated and engineered as an environmentally friendly solution for rehabilitating pipes, culverts, and containment areas.

Unlike other cementitious mortars and grouts, GeoSpray® spray-applied liners help create a new structural pipe within the old pipe. This process requires no digging – virtually eliminating traffic delays – and is fast to install. Using GeoSpray®mortar improves performance and strength and is less costly than alternatives, including SPR, CIPP, and slip-lining.

Dating back to the earliest historical uses of cementitious formulations as building materials, society has looked for ways to use the wide variety of available raw materials to improve the physical properties of the final products.

Evidence of the inclusion of volcanic materials such as volcanic ashes by the ancient Greeks dates back to at least 500–400 BC. As early as the 1920s, cement formulators have employed refined industrial byproducts such as fly ash, metal slag and processed silicas, collectively referred to as pozzolans, as fillers and aggregates in standard cements. Today, almost all cement formulations contain some percentage of these natural or manmade by-products.

It has long been know that these pozzolans undergo chemical reactions with standard cement materials that improve properties, such as compressive strength, and bind materials like calcium hydroxide, Ca(OH)2, enhancing the resistance to chemical corrosion.

In the early 1970s a French scientist, Joseph Davidovits, discovered that under the right set of conditions these components could fully react with one another to form an extended polymeric network primarily made of Aluminosilicate bonds (Al-O-Si). He coined the term geopolymer to refer to this new class of materials.

Since that time, engineers and scientist around the world have worked to develop commercially viable geopolymer solutions for a wide variety of industrial applications. GeoTree Solutions has developed a state-of-theart geopolymer mortar – GeoSpray® – that exploits the physical and chemical advantages of geopolymeric materials in a form that is easy to use and employ in the field. 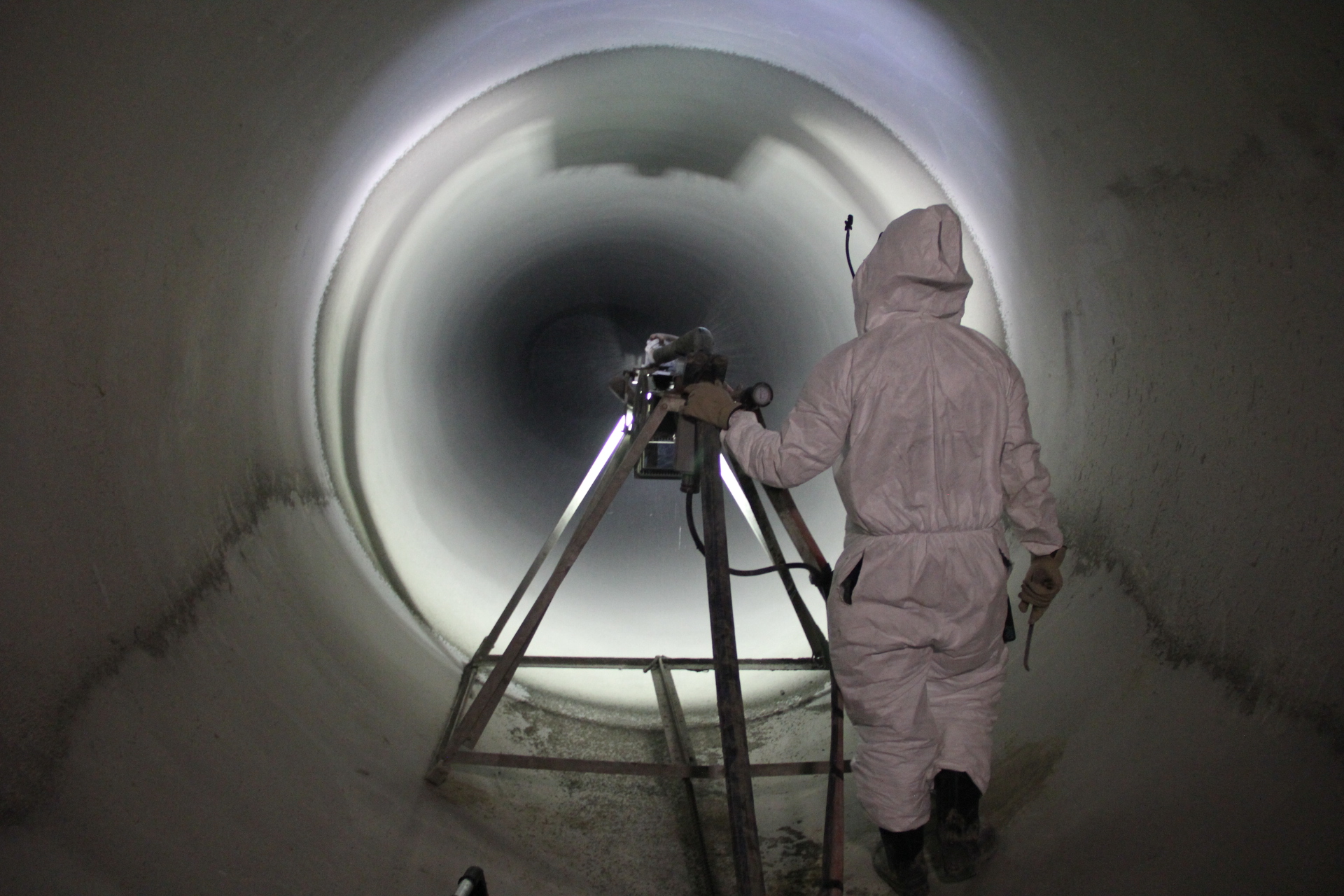 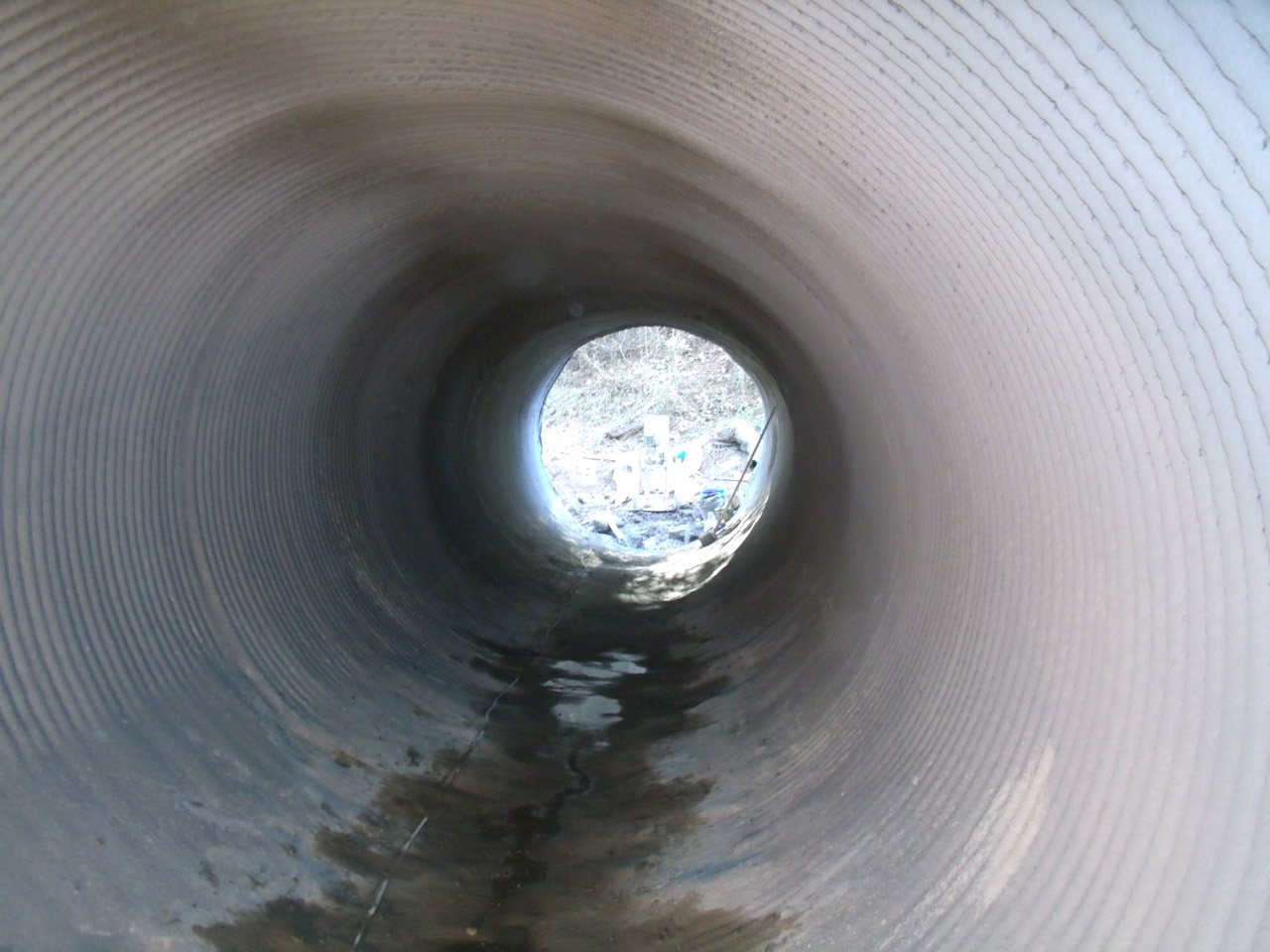 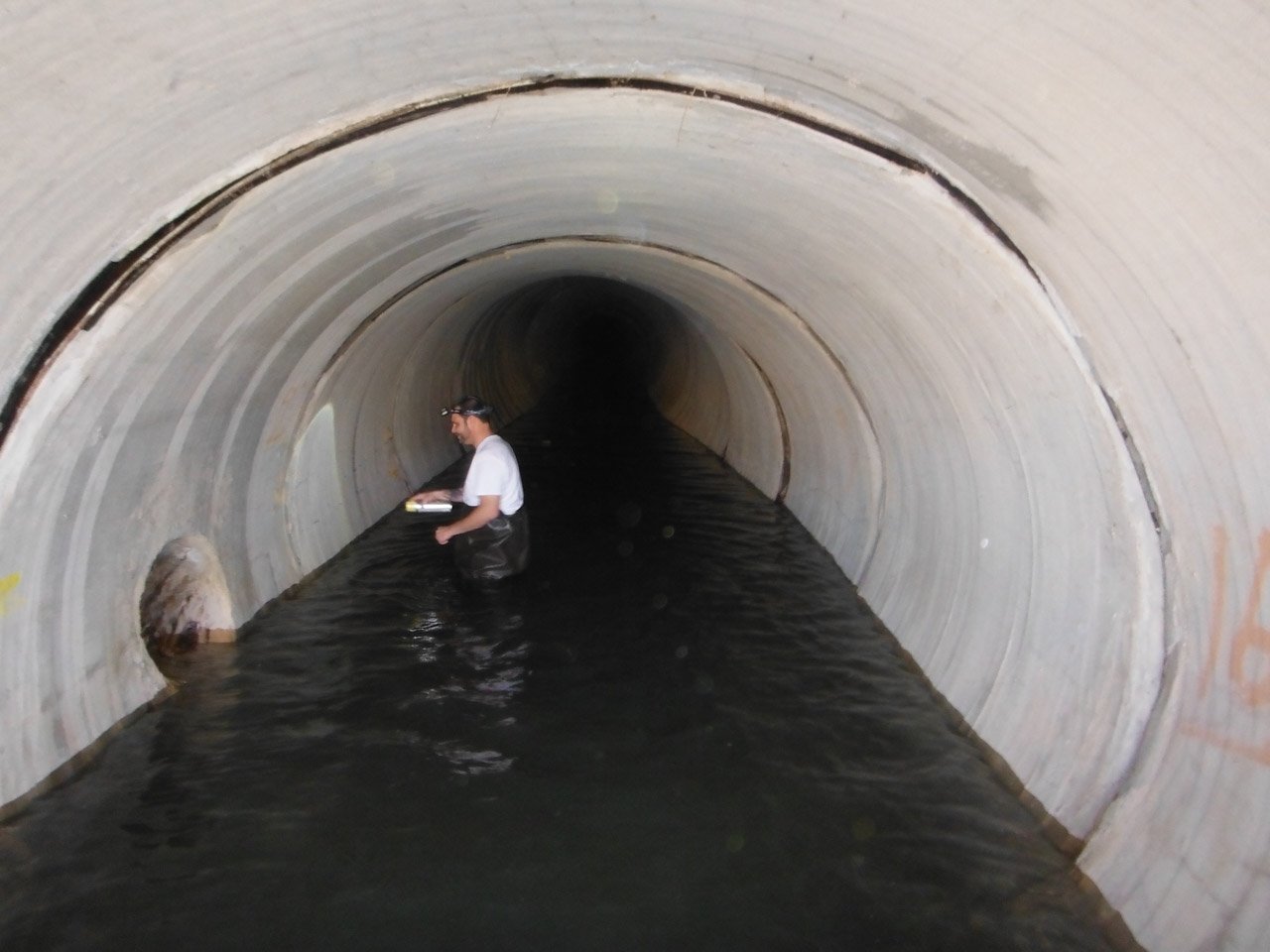 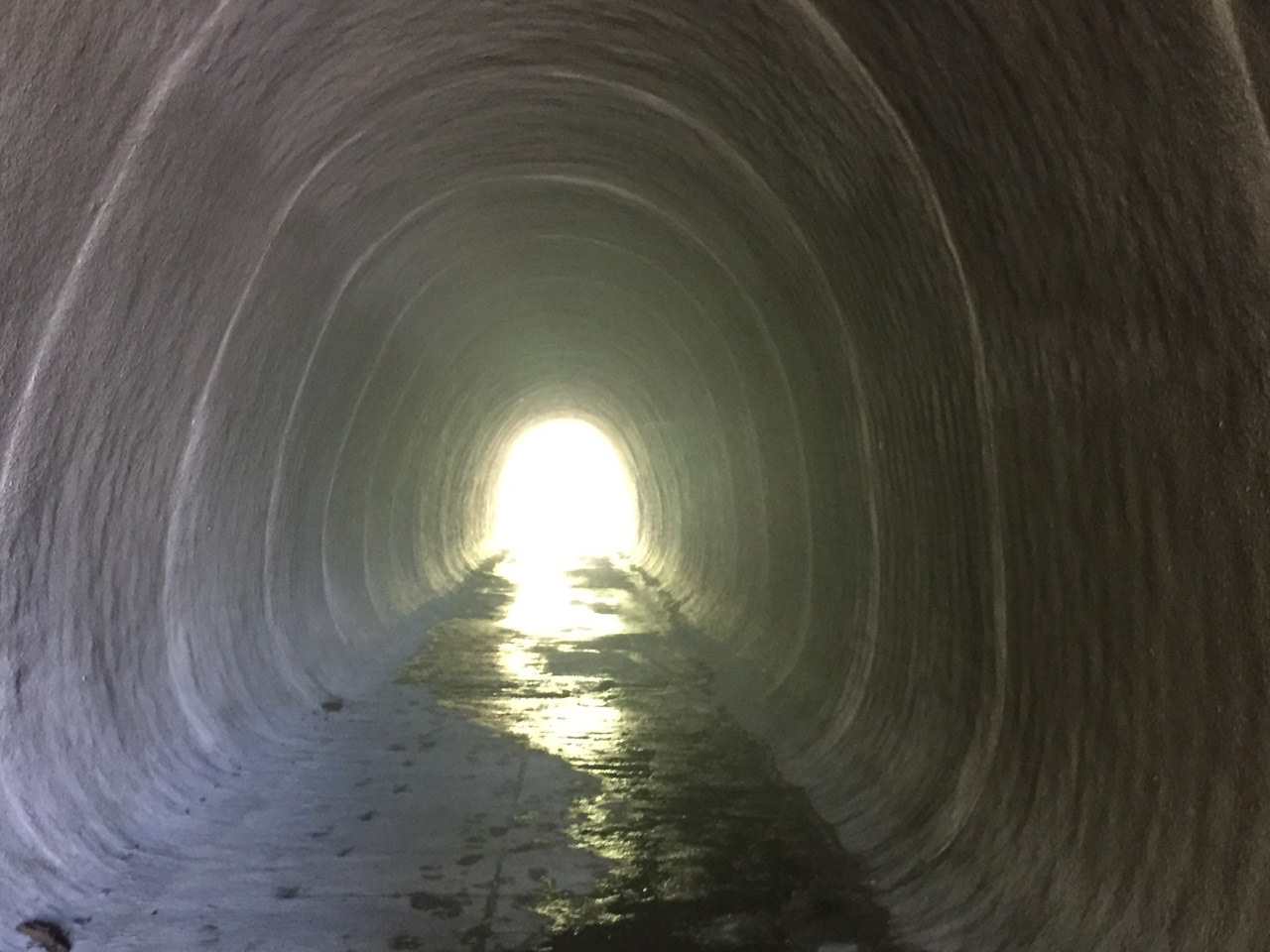 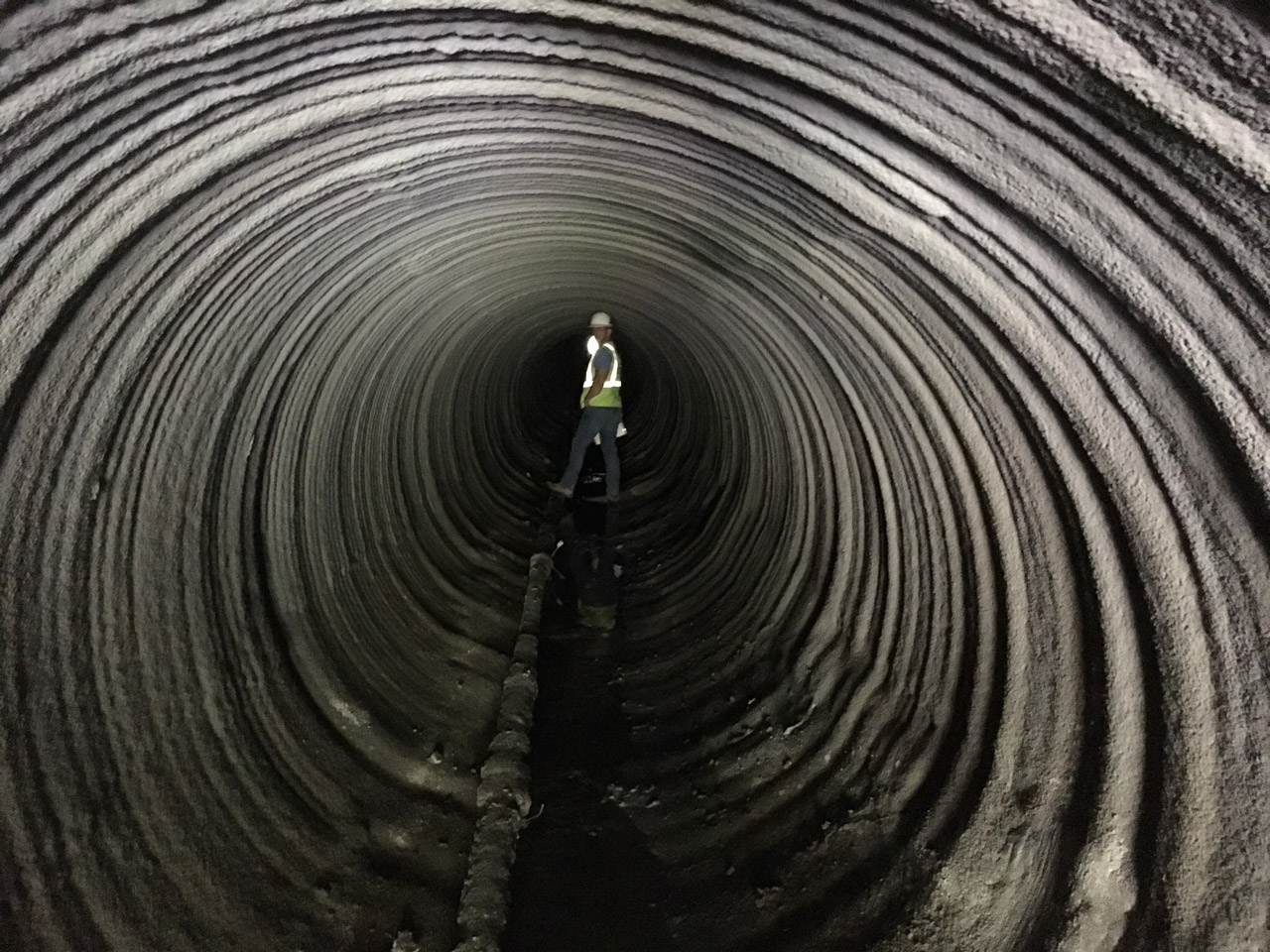 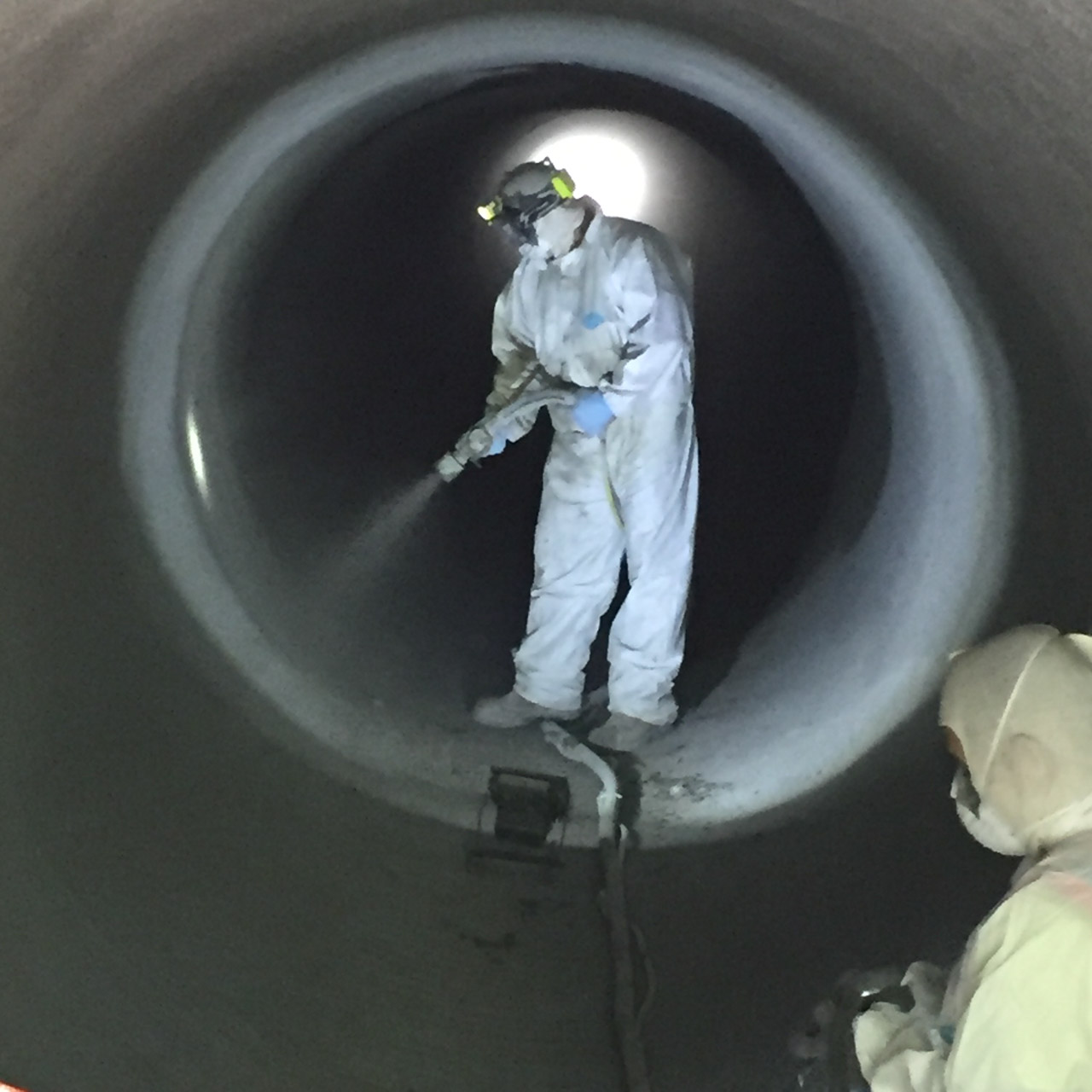 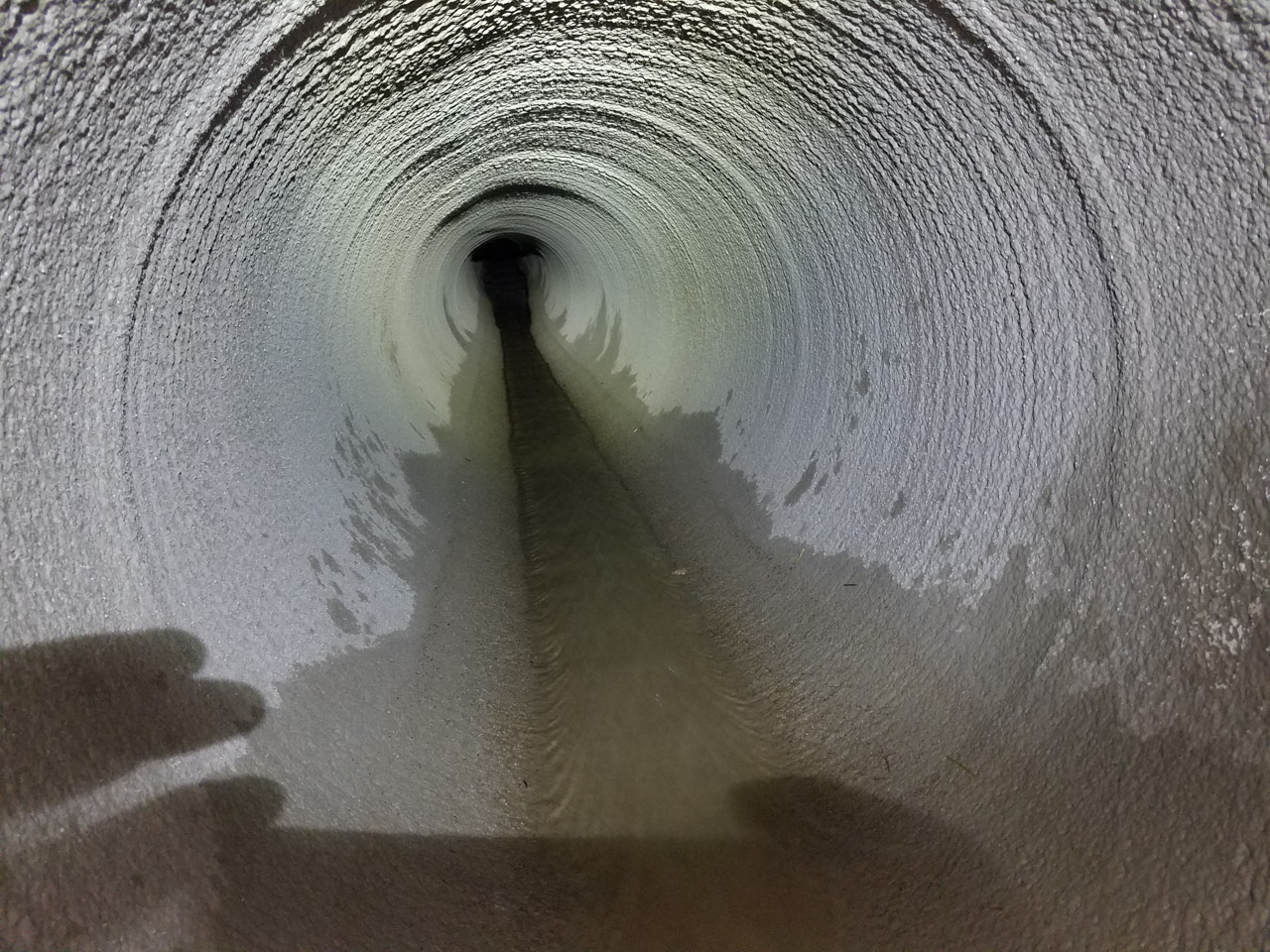 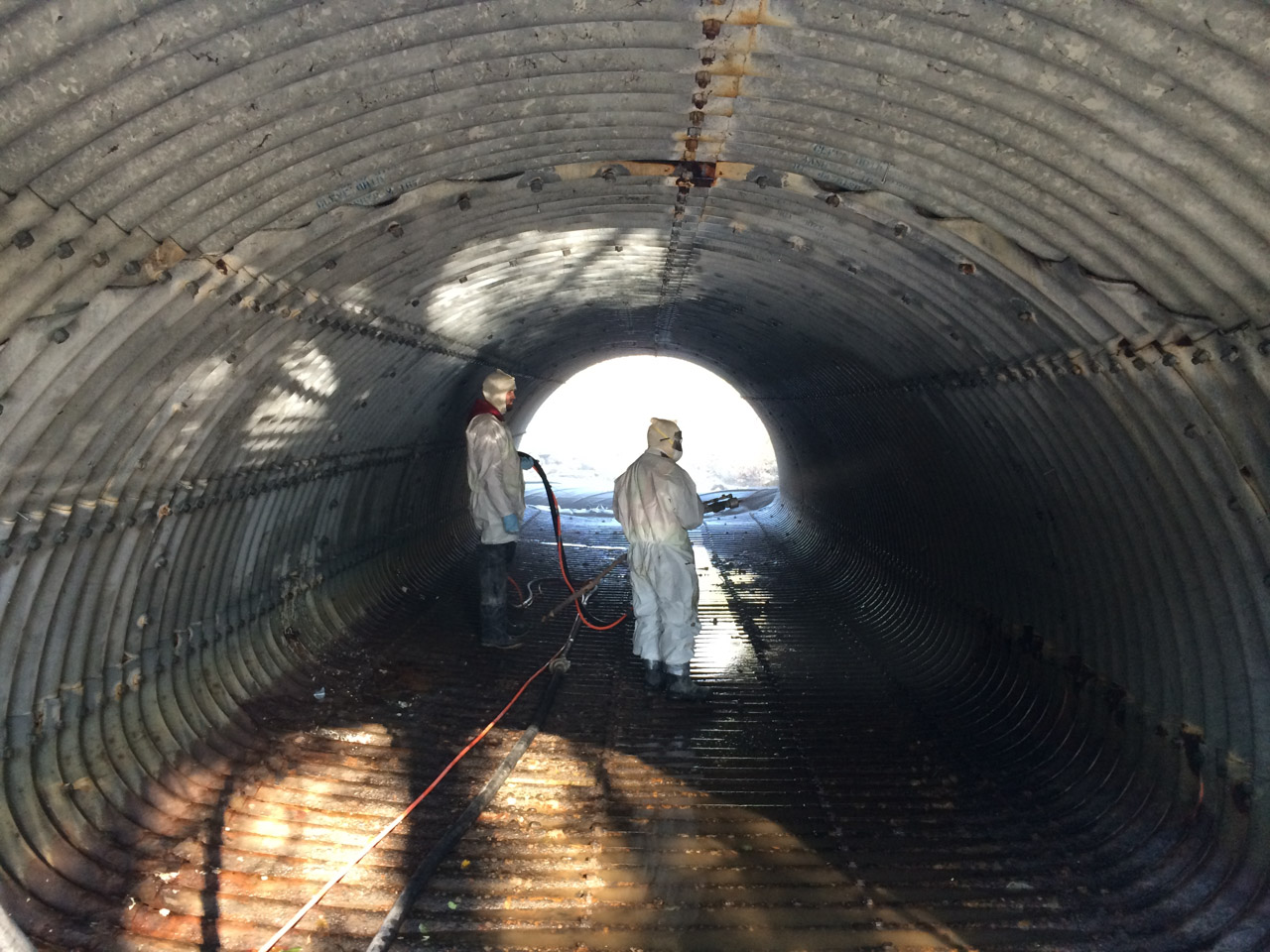 WATER/WASTEWATERPROJECT OVERVIEWIn May 2016, a massive sinkhole formed underneath Tireman Avenue in Detroit, Michigan. The root of the problem was a fractured sewer line. A damaged pipe leading to a major concrete interceptor caused heavy infiltration, which in turn resulted in soil loss around the interceptor at the fractured location of the pipe. The soil […]

WATER/WASTEWATERPROJECT OVERVIEWThe town of Cary, North Carolina, is an affluent municipality located southwest of Raleigh. The town is near the center of the Triangle region, a commuter area consisting of three major universities: Duke, UNC and NC State as well as the technology hub located in Research Triangle Park. The housing development of Preston is […]

WATER/WASTEWATERPROJECT OVERVIEWAs part of the 13 Mile Road rehabilitation from Haggerty Road to Halsted Road, twin parallel 78” CMP culverts were to be relined with geopolymer mortar. Each of the twin culverts are approximately 200 linear feet. The culverts are used carry the flow of Seeley Drain under 13 Mile Road immediately east of Haggerty […]

WATER/WASTEWATERPROJECT OVERVIEWIn early 2013, Henrico County, Virginia, identified a 120-linear foot section of 66-inch steel culvert running under Byrdhill Road in need of structural repair. The pipe was approximately 25 feet under the road and was suffering from severe rust and corrosion that is common in metal pipes over 25 years old. While the pipe […]

WATER/WASTEWATERPROJECT OVERVIEWIn January of 2016, the Colorado Department of Transportation (CDOT placed a project for public bid, which included the repair of several large diameter highway culverts and a single box culvert. CDOT had  specified a sprayapplied culvert lining under a special revision to Section 603 of its standard specifications. To bid, contractors were required […]

WATER/WASTEWATERPROJECT OVERVIEWWellington City Council was looking for a solution to repair the 1350-millimeter South Karori stormwater corrugated culvert. During the past 50 years of its service, the culvert’s invert had fully degraded over its entire length (220 meters) from erosion and corrosion, with holes of up to 500 millimeters deep throughout the culvert. The culvert […]

WATER/WASTEWATERPROJECT OVERVIEWA 10-mile portion of a sanitary sewer interceptor was inspected for the first time in 2010 since its construction in 1970. The interceptor ranges from 60-90 inches in diameter and includes several inverted siphon crossings. LSCE had the inspection data evaluated to move forward with repair recommendations and implementation. The first phase of work […]

STRUCTURAL STRENGTHENING  OIL-GAS/INDUSTRIALPROJECT OVERVIEWThe city of Auburn, NY, currently operates several small hydroelectric facilities that use the water from the Owasco River, just north of the Finger Lakes. One of these includes the Mill Street Dam Hydropower Facility. The systems consist of a dam that diverts water during high flow times through a penstock to […]

WATER/WASTEWATERPROJECT OVERVIEWThe Dewey Plant has been producing textile chemicals, colorants and other specialty compounds since 1969, and the plant has been expanded several times over that same period. The facility has a series of chemical sewers that collect and direct waste chemical solutions for treatment and processing. In 2000, the plant installed HDPE piping as […]

STRUCTURAL STRENGTHENING  OIL-GAS/INDUSTRIALPROJECT OVERVIEWA coal burning power plant, owned and operated by Kazakhmys Energy, was experiencing major leaks in the two major input cooling pipes that route water to the thermal power station. This plant, which was constructed in the 1930s, supplies power to the whole of the surrounding region. After inspection, these pipes, installed […]

WATER/WASTEWATERPROJECT OVERVIEWThe Indiana Department of Transportation (INDOT) had a series of culverts along US Highway 31 in northwestern Indiana in need of rehabilitation. It specified various pre-approved options based on the physical state of the culverts, the access to the inlet and outlet and hydraulic concerns. One of these culverts was a 78-inch CMP segmented […]

WATER/WASTEWATERPROJECT OVERVIEWThe community of Walden on Lake Conroe had been experiencing significant growth and the water infrastructure had begun to feel the burden. A 130 linear foot corrugated metal pipe (66 inches in diameter) that conveyed storm water from a local thoroughfare into the lake was severely deteriorated over most of its length with a […]

WATER/WASTEWATERPROJECT OVERVIEWAs part of a demonstration and research project sponsored by the US Army Engineer Research and Development Center located in Champaign, IL, the US Army Corp of Engineers (USACE), in conjunction with Fort Bragg’s Directorate of Public Works, completed the rehabilitation of a CMP culvert at the Simmons Army Airfield. The research and development […]

WATER/WASTEWATERPROJECT OVERVIEWLos Angeles Sanitation collects, cleans and recycles solid and liquid waste generated by residential, commercial and industrial users in the city of Los Angeles and surrounding communities. The system serves over four million residents. The Bureau of Engineering for the Department of Public Works is responsible for maintaining the sewer and storm water systems […]

WATER/WASTEWATERPROJECT OVERVIEWA southeastern US oil refinery decided to evaluate the condition of its process sewer manholes at one of its refinery sites. Refinery officials discovered the leaks while conducting a routine five year inspection of the process sewer line. Inspection results revealed that many of the manholes and catch basins had begun to leach where […]

WATER/WASTEWATERPROJECT OVERVIEWThe US Army Corps of Engineers (USACE) is responsible for the maintenance and operation of utilities at Arlington National Cemetery directly on the banks of the Potomac River in Arlington, VA. USACE is currently engaged in a multiyear, multi phase project to rehabilitate and upgrade the storm water system that handles water and drainage […]

WATER/WASTEWATERPROJECT OVERVIEWDC Water engineering had identified a route along Klingle Road in Washington, D.C., where the sewer pipe was in need of rehabilitation. Though the pipe diameter was below the threshold for standard application parameters for a spray lining, the client specified the use of a geopolymer for the manhole rehabilitation portion.The 72” (1830mm) diameter […]

WATER/WASTEWATERPROJECT OVERVIEWLike most major cities, Houston has a system of aging pipes and other infrastructure that needs to be repaired. Over the past several years, Houston has installed nearly 10,000 linear feet of GeoSpray AMS to address corroded reinforced concrete pipe (RCP) as part of its sewer infrastructure renewal program.RCP is generally vulnerable to Microbial-Induced […]

WATER/WASTEWATERPROJECT OVERVIEWA 54” concrete sewer in Bloomington, IL, was beginning to show signs of corrosive deterioration above the flow line of the sewer. To prevent the corrosion from reaching the steel framework of the reinforced concrete pipe, the Bloomington and Normal Water Reclamation District (BNWRD) wanted a 1” maximum corrosion resistant lining installed to extend […]

WATER/WASTEWATERPROJECT OVERVIEWDuring an assessment of its combined sewer system, the Metropolitan Sewer District of Greater Cincinnati (MSD) discovered that an 800-foot section of stacked stone and brick sewer line, situated in an area with active natural springs, was badly leaking. Records indicated that the old stone pipe was likely installed in phases between 1870 and […]

WATER/WASTEWATERPROJECT OVERVIEWDuring inspections of its road culverts, the city of Rock Springs discovered a corrugated metal culvert that was considered in danger of imminent failure. The 700-foot culvert in question was arched with a maximum height of 48 inches and a maximum width of 72 inches.The invert of the pipe, which was covered with dirt […]

WATER/WASTEWATERPROJECT OVERVIEWThe Florida Department of Transportation (FDOT) is the owner of a storm sewer system that runs approximately 1,600 linear feet near the intersection of Florida State Hwy 50 and Country Lane in Orlando, FL. The first 1,200 linear feet of reinforced concrete pipe (RCP) had an inner diameter of 60 inches, while the remaining […]

WATER/WASTEWATERPROJECT OVERVIEWThe City of Santee is faced with the same problem as every other city and county with aging storm water infrastructure. At the busy intersection of Magnolia Avenue and Woodside Avenue, a large potential problem was looming just below the street. A 48” and a 54” storm water corrugated metal pipe that ultimately empties […]

WATER/WASTEWATERPROJECT OVERVIEWThe city of Auckland, as with many other parts of New Zealand and around the world, have utilized galvanised corrugated iron culverts as part of the drainage network. Typical installations are to enable roads and rail to costeffectively traverse creeks, streams and small rivers. The original purpose for the installation of the Kashmir Road […]

WATER/WASTEWATERPROJECT OVERVIEWThe city of Troy, MI, is located among Metropolitan Detroit’s northern suburbs in Oakland County. It currently maintains a network of over 350 miles of local, major and county roads under the jurisdiction of its Public Works department. The city has a regular inspection program for its storm culverts and bridges. During recent inspections […]

WATER/WASTEWATERPROJECT OVERVIEWIn early 2015, the City of Memphis hired Jacobs Engineering to design a rehabilitation solution for the Sears crosstown box culvert system. This inspection included the evaluation of twin 8.5’ x 8’ concrete box culverts, each a length of 500 linear  ft, that are part of the Madison Heights drainage basin. After completing an […]

WATER/WASTEWATERPROJECT OVERVIEWDC Water’s engineering group implemented a pipe entry inspection after receiving an alert from the District Department of Transportation (DDOT) to verify the integrity of a 72” diameter brick sewer. This was located at the F Street NW block between 11th and 12th streets. DDOT had done a bore-hole inspection at a street depression, […]

WATER/WASTEWATERPROJECT OVERVIEWThe North Carolina Department of Transportation (NCDOT) was looking for an initial challenging project to complete in North Carolina with GeoSpray mortar. Along the banks of the Roanoke River in the city of Weldon, NC, NCDOT was faced with significant issues of culvert failure and bank erosion that were beginning to threaten private homes. […]

WATER/WASTEWATER   STRUCTURAL STRENGTHENING PROJECT OVERVIEWThe invert of a 12’ diameter CMP culvert in Noble County, IN, was experiencing minor pitting and rusting. The Noble County Highway Department needed a preventative solution to protect the invert from further abrasion and deterioration. The Highway Department wanted to make minor repairs instead of waiting for the culvert to get […]

WATER/WASTEWATER   STRUCTURAL STRENGTHENING PROJECT OVERVIEWThis existing 9-foot diameter corrugated metal pipe (CMP) was corroding or rusting through the invert or base of the pipe. At some points, water was just beginning to undermine the culvert, forcing the township to take some action or risk affecting the roadway embankment and potentially forcing an unscheduled replacement of the […]

WATER/WASTEWATER   STRUCTURAL STRENGTHENINGPROJECT OVERVIEW The Ohio Department of Transportation’s (ODOT) Office of Hydraulic Engineering had interest in utilizing Concrete Cloth GCCM in a culvert lining/protection demonstration project. Concrete Cloth material would be used as a substitute to the ODOT standard practice of field paving an invert with 3-inchthick reinforced concrete. The Administrator for the Office […]